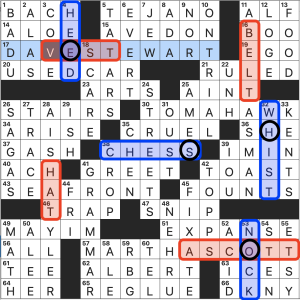 Matt Gaffney’s Wall Street Journal contest crossword, “What Should I Where?” — Conrad’s writeup.

This week we’re on the lookout for a four-letter a part of the physique. There had been 4 numbered theme entries, every containing a chunk of clothes:

Those 4 items of clothes matched a grid entry containing a physique half as soon as one letter was modified: